This is Mykonos, a Greek island in the Cyclades.  Like other Greek islands, it has white, cube shaped houses and blue windows/doors/domes. 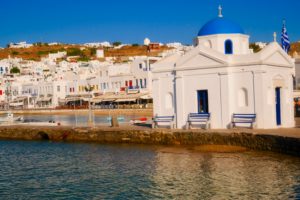 There is a story people tell about how Jackie O brought a female pelican to the island to mate with a pelican named Petros who had become a mascot on the island.  But it turned out that Petros was also a female…  Anyhow, Petros lived for 29 years and was apparently stuffed after he died.  We went looking for Petros, who was supposed to be somewhere on the island. We thought we had found him – see below – and I was taking pictures of the stuffed pelican when he suddenly moved.   Oops, it turned out that this pelican is alive.  Just after I took this shot, a woman entered the red door behind the pelican, and when the door closed, his beak got caught in it. (But he pulled it out and seemed to be ok.)  Notice how tall he is – about 3 feet. 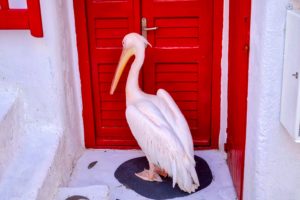 I (Buzz) just finished a class at Iliff on the philosophical search for happiness (Aristotle, Augustine, Aquinas, etc.)  But then we found happiness right there on Mykonos… 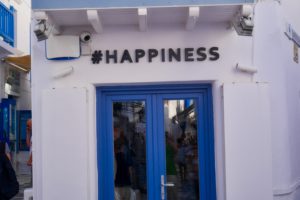 From Mykonos, we went to Delos a UNESCO World Heritage Site, to look at ancient ruins from about 1000 BC through the 3rd and 2nd centuries BC. The twin gods Artemis and Apollo were born here, and our very knowledgeable tour guide told us the story of their birth, there at the center of the Cyclades Islands (and believed to be the center of the ancient world, as well).  Below is the remains of a house, with its marble entrance still intact. 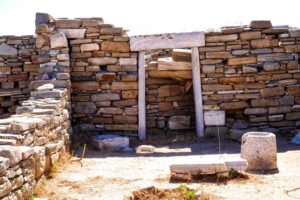