Kusadasi is our second stop in Turkey. We went first to the house where legend has it that Mary was installed by the Apostle John after Jesus’ crucifixion, and lived in till her death at a ripe old age (about our current age, actually).  The house is up high on a hill.  We are told that there were those who wanted to harm Mary (Romans) and so she was kept hidden there.  Three popes, at least, have been here and can attest to this being the very spot. 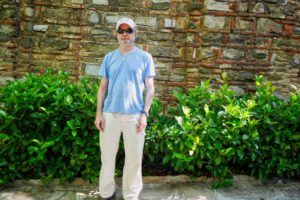 Kusadasi means “bird island”. Which confuses visitors, because it is not an island, it is very much on the mainland. Below is the actual bird island that the city was named after. 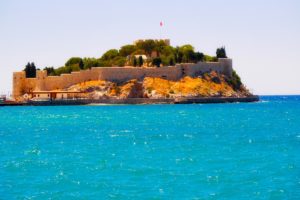 Ephesus was a port city, but now it’s 4 miles inland, because back in about 700 A.D. it became marshy and malarial and then covered by several meters of silt. No one knew anymore where it was, although it is a very important biblical city, until engineers for the railroad happened upon it in the late 19th century. (Paul got kicked out of Ephesus and later wrote a letter to the Ephesians…) Archeologists have been excavating ever since, and they have only uncovered a third of the ancient city. This is the reconstructed library, which is 80 percent original (the rest being concrete, where the marble hasn’t been found). It was the third largest library in the ancient world (Alexandria had the largest). 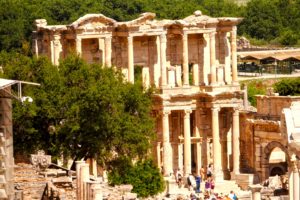 This little guy doesn’t need to hunt mice, as the keepers of Ephesus put out cat food and water in bowls. There’s a box for donations for the cats… 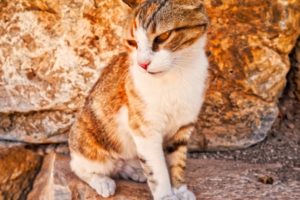 Here’s the theater at Ephesus, which held 24,000 people, and is still used for concerts – the acoustics are great even by modern standards. 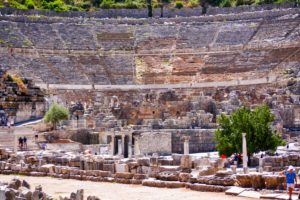